Put a dent in the universe

One of the things I often find myself repeating is that “I want to put a dent in the universe.” We are all so incredibly small in the grand scheme of things yet there’s nothing stopping us from ‘hitting above our weight’ in terms of the effect we can have on other people or our environment as long as we believe it’s possible and commit to following through.

On that note, I saw this pic floating around the interwebs a couple weeks ago and I had to save it (and share). While I’m not a physicist, the sheer enormity and legacy of the men and woman pictured is astounding. And appreciation of that fact should transcend any field. These men and woman quite literally put a dent in the universe. 19 of the 27 individuals in this picture were or became Nobel Prize winners. Be something big. Be a part of something big. Be a big part of something big. 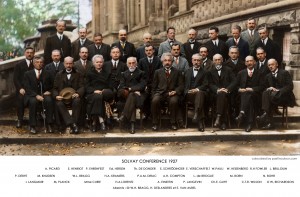