Athletic Lab: The Story of a Startup Part 6

This is the 6th installment in the ongoing series of blog entries my wife wrote for her personal blog a couple months back. If you missed the first couple entries you can catch up by following the link above. My wife’s account is far better than anything I could write up which is why I’m re-syndicating here. This is part 6 of her unedited recollection…

…We started working on the new facility bit by bit. Work was, perhaps, more difficult this time around because we had to work around class schedules. It was a gradual process. 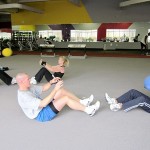 One of the first classes in the ‘new’ Athletic Lab. Two of these four people are still clients and one is now a coach.

After the equipment was in place, the first task was patching the holes in the walls. After that, we started cleaning. The building was filthy. Mike’s Mom spent an entire day cleaning the windows. Our offices were set up. We tore some of the carpet out as well as the laminate flooring to make way for our rubber flooring. The reception area was given a makeover. It had a mixture of laminate wood flooring, ceramic tile and linoleum tile. It was an eclectic mess. We scraped up what we could and covered it with some remainder of the rubber flooring. The lights were fixed throughout the building. 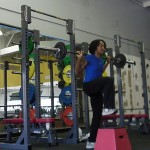 Ruby Bost – One of our original clients

Thick layers of drywall were knocked down to open up the men’s locker room showers. Luckily, the showers were in working condition. Plumbing work was completed in both locker rooms on the sinks and toilets. The water fountains and heating ducts were fixed. The roof was patched although it still leaked during hard downpours. The breaker box was labelled and the “cardio” and “aerobics” neon lights were taken down and destroyed. The side walks were pressure washed. We bought a new sign for the outside of the building. 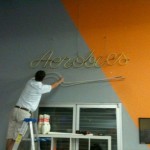 Taking down the “aerobics” sign that disgraced our walls

It was time to start painting. We were given a quote by a painting company of $10k to paint the interior of the building. We were going to be hosting a clinic and Mike wanted the painting finished in time for the clinic. Sometimes, we used events and competitions we were hosting as a spur to get work accomplished. We couldn’t afford the painting company. With a paint roller in hand, I painted all of Athletic Lab 2.0 including the exterior of the front of the building. It took hundreds of hours of taping, climbing on an extension ladder and painting to cover the 18′ high walls. Eric helped quite a bit with the tape job. 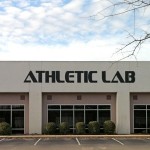 One day, I was at the top of the extension ladder painting near the entrance when the bottom of the ladder slid out from under me. With a paint brush in one hand and a paint bucket in the other, I grabbed a beam and screamed for Mike to help. He ran from his office and came to my rescue. Somehow, I didn’t spill a drop of paint. I learned to always put the ladder on rubber when I was working over tile.

Record and performance boards were painted on the walls with dry erase paint. I don’t think Mike’s deadline was met, but I finally finished. I’ve chosen to stay away from painting ever since then. When touch-ups are necessary, I pawn them off on someone else. After the painting was finished, large decals were added to the walls. 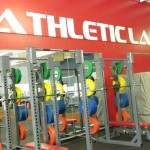 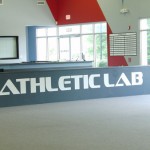 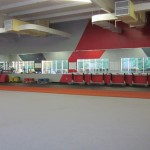 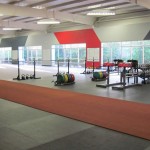 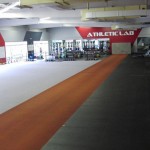 While all of the work was taking place on the building, we were on a mission to build our client numbers as well. We had five months of free rent and after that, we were going to be slammed with an enormous bill for rent. We started an affiliation with CrossFit. What had been our Performance Fitness program changed names to CrossFit. We partnered with CASL (a soccer league) and our contract with the Carolina Railhawks was changed to better benefit us. We hosted several clinics, started bringing in entire teams and we sold Mike’s presentation DVDs and the books he had authored. Mike started taking on private training sessions and he traveled nearly every weekend for speaking engagements… 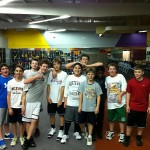 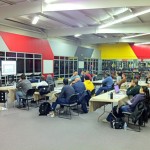 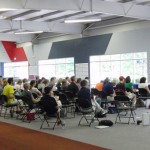 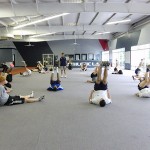 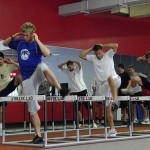 « Athletic Lab: The Story of a Startup Part 5 » Where were you?