Athletic Lab: The Story of a Startup Part 4

This is the 4th installment in a series of blog entries my wife wrote for her personal blog a couple months back. If you missed the first three entries here are links to part 1, part 2 and part 3. My wife’s account is far better than anything I could write up which is why I’m re-syndicating here. This is part 4 of her unedited recollection…

Like any other day, Mike opened the doors to Athletic Lab. On this particular day, a high school pole vaulter and her father showed up. Our first client (outside of the elite athletes). They had been referred by a guy who briefly met us at a high school pole vault practice. I had the first of several broken vacuum cleaners torn apart in the back while they were talking to Mike. Eva was running around.

To the Caldwell family: thank you so much for your faith in us and your support. This young lady is now a pole vaulter at UNCW and we enjoy her visits to Athletic Lab when she’s on vacation from school. The Caldwell family will probably never know how much that $50 Trader Joe’s gift card for Christmas was worth to us that year! 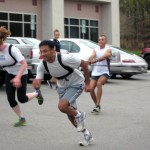 Next, came a Performance Fitness client (we weren’t actually CrossFit at that time. The program was called Performance Fitness). He had a flyer illegally placed on the windshield of his car while he was running at Bond Park (thanks to Eric).

Sanjay, thank you for your loyalty, friendship, words of wisdom and awesome sense of humor! I could always tell when Sanjay had been at Athletic Lab 1.0 the techno music would still be playing long after he had left. Sanjay is our longest-standing existing client.

Elite Athletes. A group that was steadily growing. Other than Mike and myself, the elite athletes put in as many hours at Athletic Lab than anyone (both training and helping out around the facility). A majority of them paid for their training by working around Athletic Lab. 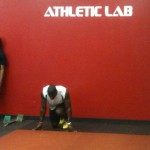 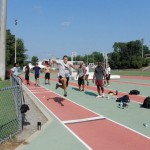 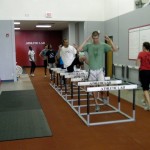 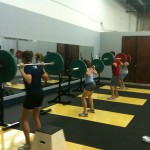 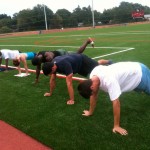 The following months brought the addition of clients. With each client, we gained a friend. I think it’s one thing to own a gym where clients come to workout. It’s another to be passionate about bettering the lives of your friends who come to your home to workout. I hated to view everyone as members or clients, they rather became intertwined with us like family. If someone was upset with their progress, it crushed us. If someone was elated with their performances, we too were excited for them. If we were unable to travel home for a holiday, we celebrated together. To me, this is what Athletic Lab should be. It pleased me to witness someone dragging themselves in before a class with all of the stress of the day on their shoulders and leave with an endorphins-induced smile on their face after an hour of working out with us. Kids wanted to come hang out after school. Adults wanted to stay after class to chat. That was a good indication to me that we were doing something right (aside from developing muscles, subtracting inches and bettering performances). 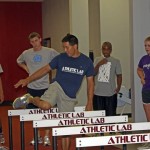 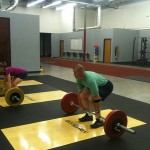 Greg who 2 years later became a coach for us 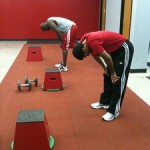 Sanjay working with our intern Chris (who eventually became a coach) 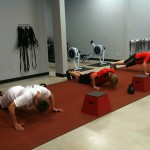 The rest of that first year came as a blur. Mike kept a cot in his office and we had a kitchen at the facility with a stocked refrigerator. He lived at Athletic Lab when he wasn’t on the road for speaking engagements (which was very often). We spent nights and weekends cleaning the place from top to bottom. Saturday nights were reserved for a massive cleaning. Almost everything we did revolved around Athletic Lab.

We soon rented out space to a pole vault club named Pole Flyers. Several pole vaulting clients followed, including one of our athletes who became a News and Observer Athlete of the Year. An Olympic Weightlifting club and classes were added. The first classes consisted of Mike and our intern at the time, Chris Garret. TPI, golf training, was added and it was later dropped. We hosted several clinics, including: Triathlon, Weightlifting and Track & Field. Several speed camps were thrown into the mix as well. We became volunteer coaches at Cary Academy. In return for our work, our elite athletes could use their track to train. A physical therapy company moved in and a massage therapist named Tate set up shop. We were selling our excess equipment nearly everyday. Things were starting to roll. There were little set backs here and there. We learned to deal with them and keep going. 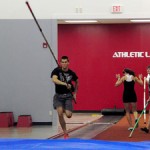 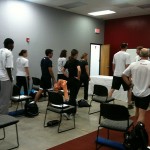 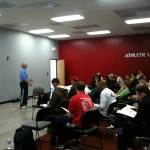 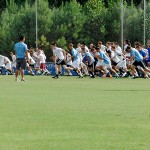 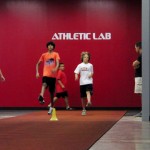 As a business owner, there are days that you try to forget. For instance, the owner of the pole vault club was having a pole vault box cut into the concrete floor. He hired a couple of guys to come cut the floor. Mike and I were there when the workers drunkenly staggered through the door. The following day, the head coach of the Carolina Railhawks (a local professional soccer club) was going to be coming to meet Mike and to look at the facility. He heard about us from a flyer that was illegally put onto his windshield at a soccer park. Go Eric! Anyhow, the guys cutting into the floor should have been using a wet saw (to help cut through the concrete and to cut down on the dust), but they didn’t. Mike and I left to eat dinner. When we came back, tons of dust floated throughout the entire facility. Dust inches thick. It landed on every square inch of the facility, including all of the equipment. They weren’t able to cut out the box either. Epic fail. It would have to be finished by someone else at a later time. That night is a bit of a fog. By morning, we had the place pretty much dust-free. The next day, Martin Rennie came to Athletic Lab and met Mike. We became the official training center of the Carolina Railhawks. Many soccer players followed. A relationship with Martin Rennie, currently the Vancouver Whitecaps head coach, blossomed. We started setting up a booth at the Railhawks home games at the WakeMed Soccer Park. At each game, we had a fitness challenge. The challenges varied from pullups to timed squats. Something as small as a flyer on someone’s windshield and taking the time to care about the appearance of the facility ultimately altered the path of Athletic Lab’s future as well as our own.

Another evening I’d like to forget: On the first afternoon/evening Mike had taken off since we first opened, he received a call on Thanksgiving from someone wanting to buy a kettlebell. We had decided to spend a quiet Thanksgiving together with our tiny family. I started to prepare Thanksgiving dinner. The upside to not being able to afford a nice turkey was that a chicken didn’t take as long to roast. Eva and I waited for Mike to come home and we finally ate without him. He showed up after 9:00PM. The customer didn’t want to purchase a kettlebell after all. He just had some questions he wanted to ask Mike. This became a growing theme. People wanted to pick Mike’s brain with random training questions. As the business grew, there was also a growing theme for us to go ahead and eat dinner without Mike.

I’ll never forget the time someone from the pole vault club apparently flushed paper towels down two of the toilets in the women’s restroom. I spent ten hours with my dad (on what was supposed to be my parents vacation) and a snake trying to avoid hiring a plumber. A plumber was eventually called and it resulted in a large bill. The bill cost nearly as much as the club was paying in rent for the month. We parted ways with the pole vault club not long after that. 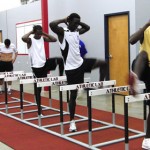 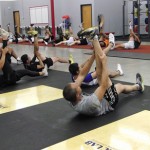 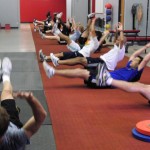 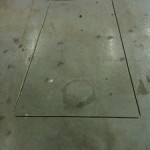 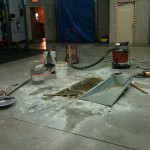 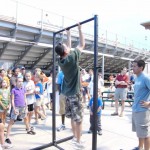 Grassroots promotion at a Railhawks game

I’ll also never forget teaching a class when Mike was out of town and Sanjay was the only one in attendance. It’s hard to imagine now that classes have a waiting list, but at the time, it wasn’t unusual to have one or two people per class. Anyhow, during this particular class, Eva ran outside and locked herself out. I just barely heard her screaming and ran out to find her in the parking lot. When Mike was out of town, I was the only other trainer with Eva as my assistant. I think she sensed the urgency to be on her best behavior and it ultimately ended in the worst way. Looking back, it was a lot to ask of a two-year-old. At the time, we didn’t have much of a choice. We didn’t have the means to hire another trainer. After this incident, we made a playroom for her in an empty office. For the most part, it kept her occupied for short bouts of time. Eric was gradually worked into the mix as an instructor. Chris Garrett, our intern at the time, was still shadowing.

Later, in our first year at Ath Lab 1.0, Virginia Tech’s Baseball team came to train while they were in town for a tournament. Mike happened to be out of town so Chris Garrett (now one of our most popular instructors) opened up for us. My iPod was on the iPod dock on shuffle. When Eva’s “Mary Had a Little Lamb” randomly started playing, I think all of the baseball players really enjoyed it! Otherwise, “The Lab was a big hit with them and they left some t-shirts for us.

Our first year rolled around. The business thrived in its first year. The business had paid for itself (without paying us). It was a better outcome than we were expecting before we even moved to NC. We personally didn’t make anything, but it was a good indication that the business was going to survive. It was an enormously long year. We survived. Athletic Lab was by no means where we knew it could be, but it was well on the way. At times, our facility was completely too small, especially when we were filled beyond capacity with all 30 Carolina Railhawk players and the coaches who worked out with them. In our first year, more than 50% of our clients were elite Olympic sport or professional athletes. With this first year came the end of our sublease in Athletic Lab 1.0 on Aviation Parkway. If we wanted to stay, we’d have to take over the entire lease. Mike started the search for Athletic Lab 2.0.

« Sweat it out » I will not be outworked