Athletic Lab: The Story of a Startup Part 11

Here’s the 11th and final post in my wife’s blog series that she wrote for her personal blog a couple months back about her recollections of starting Athletic Lab. You can catch up on the previous 10 posts by following the link above. My wife’s account is pretty amazing which is why I’m re-syndicating here rather than trying to do it myself. So here’s the final part of her unedited recollection… 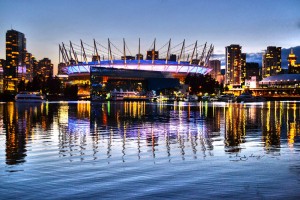 With the ink still dewy on the newly signed contract, we knew Mike would have to leave quickly. The Whitecaps had already started their season. What we didn’t know was how abruptly he would have to leave North Carolina. He left for a speaking engagement on Friday, March 9th and he wouldn’t be home until Sunday, the 11th. While he was out of town, the Whitecaps purchased his plane tickets to Vancouver and he was to fly to Canada on Monday the 12th. Life in North Carolina came to a screeching halt. It was so sudden, there was no time for him to say goodbye to everyone. It wasn’t at all how we had envisioned it happening.

After he came home on Sunday, we stayed up doing laundry and packing his suitcases. There’s nothing quite like moving across the continent to a new country and packing your bags the night beforehand. Mike taught classes as usual on Monday morning and he said farewell to NC State. He rushed home to throw some last minute things into his suitcases and we drove to Athletic Lab to pick up some of his paperwork he’d need for getting through immigration. 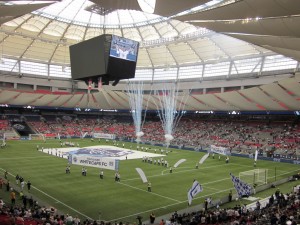 Pre-Game Ceremonies Inside BC Place

At Athletic Lab, Eva and I sat in the car while he ran in for the paperwork. I glanced up and saw him run back through the door toward the car with his paperwork in hand. He climbed in. Silence. There was a moment of hesitation, a pause, with a quick glance back at the building. A sigh. The car pulled out of the parking lot and I tried pretending as though I was just dropping Mike off at the airport for another speaking engagement. I couldn’t fool myself. In reality, he wouldn’t be returning, at least not for a long time. That short trip to the airport was so long, but at the same time, it just wasn’t long enough. I didn’t dare look in his direction. I stared out the window until it became blurred with tears. Other than sniffles, we both remained silent until Mike whispered, “this doesn’t feel right.” I whispered, “it’s too late.” We pulled into the airport and stopped the car. We got out to unload the suitcases and we stood frozen, clinging onto each other in the midst of the airport traffic that swirled around us. We eventually peeled ourselves apart, Mike grabbed his bags and he headed for the terminal. I glanced down at the ground. The pavement was littered with tears where we had been standing. 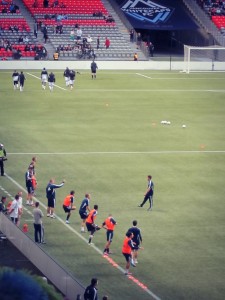 I plopped into the driver’s seat. Eva started to wail. Much like three years ago when he had left for North Carolina to start Athletic Lab, we waved and we watched him until we could no longer see him. This time, instead of leaving with a blow up bed, tray table and computer, he walked away with his two suitcases in tow. We were starting over again. Unlike three years ago, we were leaving what had been our dream behind us to build a large addition to the side of it. I had a class to teach that I was already late for. I drove to Athletic Lab. My class was already covered. I sat in the car for a moment, glancing in the mirror to make sure my eyes weren’t too red to walk inside without drawing attention. I pulled myself together to teach my next two classes. Eva and I headed home. Mike’s side of the closet was nearly empty. The finality of the decision set in. I sat on the closet floor with Eva in my lap. We were leaving everything we’d fought so hard for.

Three weeks later, it would be my turn to walk the plank. I’m terrible at saying goodbye. I hate it. It’s such an awkward thing for me and it’s probably better left for people who are good at it. I’d much rather have the freedom to just walk away with the mutual understanding between myself and another person that it was acceptable to do just that: walk away. Unfortunately, it doesn’t work like that.

During my last weeks in North Carolina, I packed during the day, taught in the evenings and moved boxes into storage at night. There was little time for much else. The contract covered moving expenses, but we knew we would be coming back. We decided to put nearly everything we own into storage and buy new in Vancouver. A huge thanks to everyone who helped move our furniture into storage! There was nothing but an outpouring of kindness from friends and family. As our lives have become more comfortable, it becomes more evident to me that we have always been far beyond wealthy in anything that really matters in this lifetime. 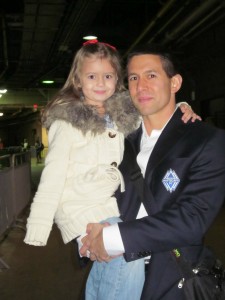 Mike reuniting with Eva after the game

Leaving Athletic Lab and everyone behind was extremely difficult. Turning out the lights on my last night at Athletic Lab was painful. I walked through the dark, silent building that moments before, had been lively and filled with friends. I sat down on the sofa (that we once took out of our living room and put into the lobby because we couldn’t afford lobby furniture), cradled my head in my hands and I cried. Leaving Athletic Lab behind felt a whole lot like leaving behind a child we had dreamed about having. We watched her grow and we had poured our lives into raising her. There she stood. I turned my back and walked away from her, my heart in pieces. I so badly wanted to turn around.

We recently visited a special Da Vinci exhibit at the Vancouver science museum. The following quote by Da Vinci was posted on the wall, “Art is never finished. It is only abandoned.” It struck me. Athletic Lab is as our masterpiece. Even though we’ve accomplished so much through Athletic Lab, it’s nowhere near its potential. Nowhere close. Although distance separates us, we’ll never abandon our business nor will we abandon the people who have helped make it what it is. There’s so much we want to accomplish and we want to see happen. We will never be finished or satisfied with Athletic Lab. There’s so much room for growth. I envision us working and toiling with Athletic Lab until we’re physically no longer capable of doing so.

Athletic Lab. In essence, it’s us. It’s our blood, our sweat, our tears. It was a seed we planted and we watched it blossom into a place where we could both teach others and learn more ourselves. When I first heard the name Athletic Lab, I laughed and questioned Mike. I’ve grown to love the name. The name gives insight into the heart of our company: providing athletic training based on scientifically proven methods. A lab it became. We were surrounded by people just like us: people who wanted to work hard and learn more about the limits of their bodies in a quest to become stronger and more physically fit. With each scholastic athlete, we saw younger versions of ourselves walk through the doors. Absolutely none of our work and struggles to build Athletic Lab would have been worth the fight without our members, staff and athletes- the strong individuals who make Athletic Lab what it is. Being in Athletic Lab feels like being at home to us. We consider you all our extended family. I know our experiences in Vancouver will bring us back to Athletic Lab with a renewed energy. We will have grown and become able to give more to a business that’s given so much to us in return.