Athletic Lab: The Story of a Startup Part 2

This is the 2nd in a series of blog entries my wife wrote for her personal blog a couple months back. If you missed the first one you’ll want to start there. As I mentioned in the first entry my wife’s account is far better than anything I could write up, I thought I’d re-syndicate here. This is part 2 of her unedited recollection…

…When the plans with Impact Athletics fell through, Mike played with the idea of moving into the back of a baseball training facility in Apex. When the space he was looking at magically kept getting smaller and smaller and the price kept creeping up, we steered clear of the baseball facility. We were facility-less. Mike charged forward with his search. 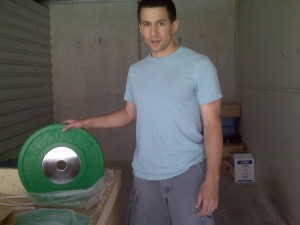 Mike opening the first set of plates that arrived

Eva and I joined Mike in North Carolina in February. After months of comparing equipment quality and prices, Mike purchased our first shipment of equipment: squat racks, squat stands, benches, weight racks and glute ham machines. Since we didn’t have a facility, we had everything shipped to a storage unit we had rented. Not long after, a shipment of crates filled with bumper plates arrived and we met the delivery guy on our way to Louisiana for Mike’s doctoral graduation. Those bumper plates are now being used on the squat racks.

The barbells and more bumper plates were shipped from China to Wilmington. Mike bought everything in mass quantities so we could buy the equipment at cost and sell the extras. We were probably the first business owners to ever actually drive to the port ourselves to pick up our crates. We did it to save on shipping costs. There were lots of hoops to jump through and paperwork to figure out, including a ‘bill of lading.’

When we went to the port, Mike drove a rental truck and I followed behind him in our car. Luckily, at the port, they loaded everything onto the truck for us with fork lifts. Unfortunately, when we drove away from the port, we realized there was too much weight on the back of the truck and the mud flaps were dragging the ground. We pulled over on the side of the road. It was sweltering in the back of that truck. It was our wedding anniversary, I was hobbling on a fractured ankle and we had a two year old with us. We got to work dragging all of the bumper plates and bars to the front of the truck. Since the crate full of barbells was too heavy to move, we had to bust a hole in it and move each bar individually. All of the extremely heavy boxes had multiple plates inside of them. The boxes were fragile and needed to be kept in tact because we were planning to sell some of them. After hours of moving everything, we drove home and unloaded it into our storage unit. We sold a lot of this equipment, but the bumper plates and some of the bars are still in use at Athletic Lab. The bumper plates have “Garage Gym” written on them and they’re stored in the vertical racks by the pullup rig.

Mike’s long search for Athletic Lab 1.0 was a success. It came in the form of a 6,300 square foot warehouse. We were to sublease from a medical software company for $3k per month. It was a deal for its size and location. It was located on Aviation Pkwy and it was two miles from the airport. My excitement quickly faded into fear as I walked in for the first time. The place was a dump. Yet again, Mike was a man with a vision. As I looked in and saw a mess, he saw what was to come… 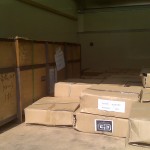 A truck filled with tons of steel and rubber 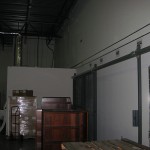 Athletic Lab 1.0 filled with junk (not ours)…yes it was this dark 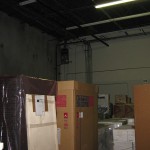 Athletic Lab 1.0 filled with junk (not ours)

« How to Achieve your Dreams » Athletic Lab: The Story of a Startup Part 3