Athletic Lab: The Story of a Startup Part I

A couple months ago my wife started a personal blog. Among her first entries was an awesome series on how we started Athletic Lab from nothing (from her perspective). The context of the series was that I had just left behind Athletic Lab to become the fitness coach at the Vancouver Whitecaps (MLS)…leaving behind what we had invested our entire life in for the previous 3 years. Earlier this month, Athletic Lab celebrated it’s 3rd birthday. Given that my wife’s account is far better than anything I could write up, I thought I’d re-syndicate here. Her recollection isn’t exactly the same as mine (mine is more of a blur) but I’m grateful she took the time to write this up because it really is awesome. This is part 1 of her unedited recollection…

There are many, many people in our extended Athletic Lab family. With the exception of a few existing clients, most of you never saw our humble beginnings in Athletic Lab 1.0. I thought I’d take the time to shine a light on a business that started out like so many others do- from very little. I hope it comes as encouragement for anyone who has ever had a dream to hold onto it and to fight for it, no matter how many set backs you encounter and no matter how much criticism may come from others. I now truly believe almost anything, within reason, is possible with hard work and the ability to keep picking yourself up after you’ve been repeatedly knocked down. 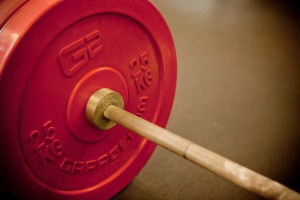 It’s six o’clock on a Friday evening at Athletic Lab. There was a huge 5:00 Performance Fitness / CF class. It ran over by a few minutes and there are nearly 20 sweaty bodies sprawled out on the carpet doing stretches with an instructor. The 6:00 class heads into a warm up with another instructor. The instructor who is teaching the scholastic class rearranges the warm up to make more room. The strongmen start trickling in for their class. Some clients are in the back working on their jump rope skills. Julie’s clients cross into the massage room. Doretta is doing a BodyMetrix scan in the back room. The music is booming. All the good parking places are taken. Our 10k square foot facility starts to feel small. The CF instructor struggles to find space on the WOD board to fit more names. We leave this scene, the lights dim and we’re left with an image that started three years ago. I held a screaming two-year-old Eva as I bit my tongue and fought to hold back the tears myself. It was a cold January day. We stood in the driveway at my parents’ house in Ohio and waved goodbye as Mike pulled away for North Carolina with a blow up bed, laptop, tray table and a dream to build a training facility. I’d be lying if I didn’t admit I had some hints of doubt. From that point, there was no turning back. In the months that led up to that moment, Mike had resigned from his collegiate coaching job at West Point, we left New York and we had been staying with my parents while Mike was busy authoring two books. We had sold a house earlier in our marriage and Mike wisely invested our earnings into stocks. This was our business start up money as well as our means of survival. The clock had started ticking. I’m very proud to announce that we’ve never once taken out a loan. We scrimped, we saved and we sacrificed to make it work. When I look back, I’m amazed at how hard we’ve worked, how far we’ve come and how much we’ve accomplished from the point in time when Mike drove away on that cold January day.

Being completely new to North Carolina and without any real connections, Mike stayed in the Sleep Inn on Page Rd for two weeks. Although we had plans of opening our own business, he soon connected with some guys from a local business, with an enormous facility, named Impact Athletics. Impact Athletics, now the O2 Fitness on James Jackson/Cary Pkwy in Cary, was re-branding itself and Mike was being brought in to head up their sports performance sector (oddly enough, this is just down the road from Athletic Lab 2.0). The day before the keys were handed over to him, a third party bought out ownership and fired everyone- including those who were hiring Mike. A set back- or so it seemed at the time. Hind sight: a blessing. Five months later, under its new ownership, Impact Athletics filed for bankruptcy and closed….

« Fear of Failure » How to Achieve your Dreams