Whether you’re a small-business owner like myself, a student, an athlete, or any joe blow for that matter, it’s always a good idea to deliver what you promise. As a person who has a natural tendency to over-promise (because I’m fatally optimistic, not because I’m trying to bamboozle) 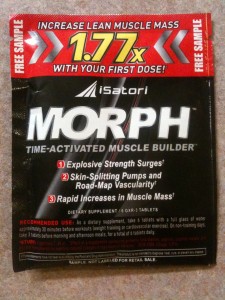 I’ve increasingly recognized how important it is to live up to the promises you make and ensure that you deliver the goods and services that you’ve promised. While over-promising may work in the short term, it will always catch up to you and ensure that you get overlooked or aren’t taken seriously the next time around. Take for example this package I recently?received?in the mail. The claims are SO insanely outlandish that it would not only be impossible to meet them but the product would probably never be taken if it actually could? Who would want to get a 177% increase in muscle mass (200 lb man turning to 344 over night)? Here’s a company that has basically doomed themselves to?under-delivery. That or they’re counting on the ignorance of their customers.