Where Are You Located? 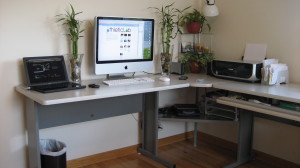 One of the most frequently asked questions when I go and do consulting work or talk at clinics is “where are you located?” The answer isn’t real quick and easy. When people ask who don’t know us, they’re expecting us to have a shiny, new facility complete with tons of weight, rows of weight lifting platforms as far as the eye can see, and motion analysis equipment to track everything under the sun. The truth is we don’t really have a central location. In fact, we don’t even really have a facility. Up until recently, I’ve had 2 business partners (now just 1) who were in Southern California. Meanwhile, I’ve been in Baton Rouge, LA; West Point, NY; and now Southeastern Ohio. As I mentioned we don’t have a facility…at least not yet (more on this in a future blog). For the past 5 years, we’ve just been hustling and doing things either via correspondence, taking on-site visits for clinics and consultations, or training athletes at public facilities. My partners and I have a running joke that we have an East Coast Division and a West Coast Division of HPC since they’re on the left side and I’m on the right. Despite these shortcomings, things have gone about as well as could be expected. We’ve doubled our profit every year for the past 5 years (not too hard when you start out making nothing)…and hey, we’re still around….something that can’t be said for most small businesses after the second year of business. And amazingly, 70% of the work gets done at a home office. Since I’ve moved to Ohio for a temporary stint I’ve essentially relocated the “East Coach Branch of HPC” and opened a new “facility.”

So back to the original question- “Where are you located?” Well, I’m temporarily located in a small, country city town village in Southeastern Ohio?and the extent of my world class facility / office / training center can be seen in the picture at the top.

« All Systems Go! » Freelancer or Entrepreneur